Growing And Flourishing In A Desert

Water is essential to life.

And it is a very precious commodity in Israel, home to 9 million people living in a rocky desert that receives about 10 inches of rain a year. By comparison, Denver, considered semi-arid, gets about 15 inches of rain a year, which is about a fourth of the precipitation a tropical city such as Miami receives.

Relying on perseverance, ingenuity and innovation, Israelis have discovered not only how to sustain life in a desert, but how to build a flourishing country.

Israel’s population has grown more than 400 percent since 1960, and the amount of water needed to support the nation’s population is more than double what’s available. 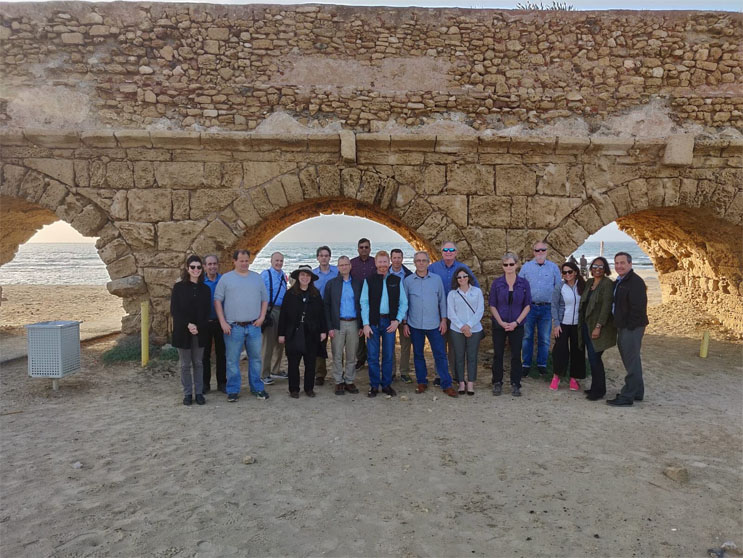 The delegation in front of a 2,000-year-old Roman aqueduct in Caesarea. The group was able to tour many historical sights to see how water was supplied to the people thousands of years ago using cisterns and underground wells and by transporting water from natural springs. (Photo credit: Chris Dermody)

So, how does Israel supply the water and grow the food necessary to sustain its people?

That was one of the questions Chris Dermody, Denver Water’s chief information officer, and Nicole Poncelet-Johnson, director of water quality and treatment, had when they joined 17 water industry professionals from across the country to travel to Israel as part of the U.S. Water Delegation to Israel. The delegation was organized by several partners in the U.S. and Israel, including the Israeli government, interested in water-focused technology and innovations.

The delegation’s goal: To learn about Israel’s latest technologies in water.

“Israel has an international reputation for being on the cutting edge of innovation in many industries, particularly water. A lot of that has to do with the country’s history,” said Poncelet-Johnson.

“The country was founded by people who were determined and committed to making Israel their homeland, and this survival instinct has driven the fast-paced, innovative philosophy that is still ingrained in everything the Israelis do today.”

Israel aims to be self-sufficient when it comes to food and water, and the government has invested heavily — $6.5 billion in 2018 alone — in water infrastructure, technology, and security.

And since water is one of Israel’s most valuable resources, protecting it is critical. 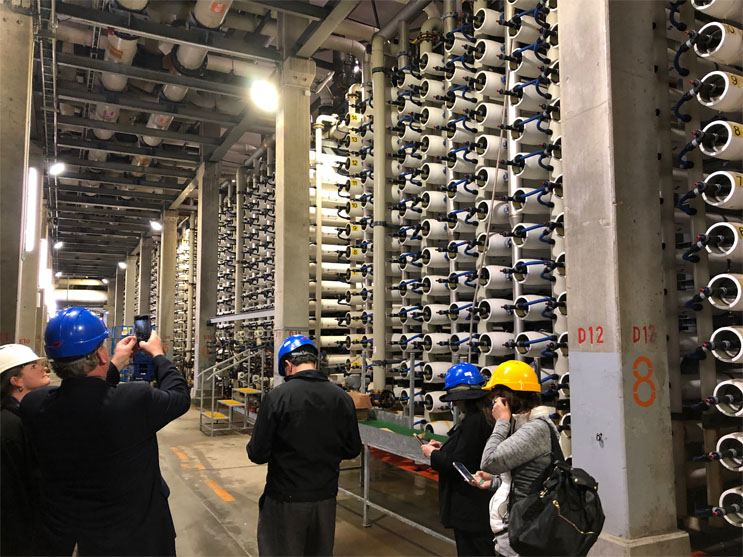 Dermody and Poncelet-Johnson, with the delegation, toured the government-run National Cybersecurity Directorate, where they met members of Israel’s computer emergency response team, saw its cybersecurity lab and learned about the country’s program for water emergency drills.

“There is definitely a heightened sense of readiness concerning water. They are continually developing new technologies to prepare for things like intentional poisoning of the water, sabotage, missile attack, system failure, human error, natural disasters, and cyberterrorism,” Dermody said.

Emergency preparedness is a part of daily life in Israel.

“The water utility provides nearly 3 million bottles of water to citizens each day, and there is a water supply station every 550 yards in most cities. They even have emergency water supplies stored under planters in parks and at schools, and each resident is given a gallon-sized reusable bag they can fill at designated fill stations in case of a water emergency,” he said.

Israel’s government manages the country’s water utility using what Denver Water refers to as the One Water approach — using the right water for the right purpose.

Because only 5 percent of Israel’s water supply is surface water, compared to 100 percent for Denver Water, Israel uses desalinization, removing salt from seawater, to provide their potable drinking water. And 90 percent of the drinking water is reclaimed and reused, primarily for agricultural irrigation.

Recognizing water was a critical issue with their growing population, the government decades ago mandated a reduction in the amount of water agriculture operations used across the country.

This forced farmers to change their approach to water use, and they stepped up to the challenge.

Today, Israeli crops thrive on reclaimed or recycled water delivered though drip irrigation systems, which use 50 percent less water than above-ground sprinklers. Farmers have found that drip systems are a more effective way to deliver just the right amount of water a plant needed, and new technologies inject nutrients directly into irrigation systems to help the plants grow.

As a result, crop yields have grown by 25 percent. 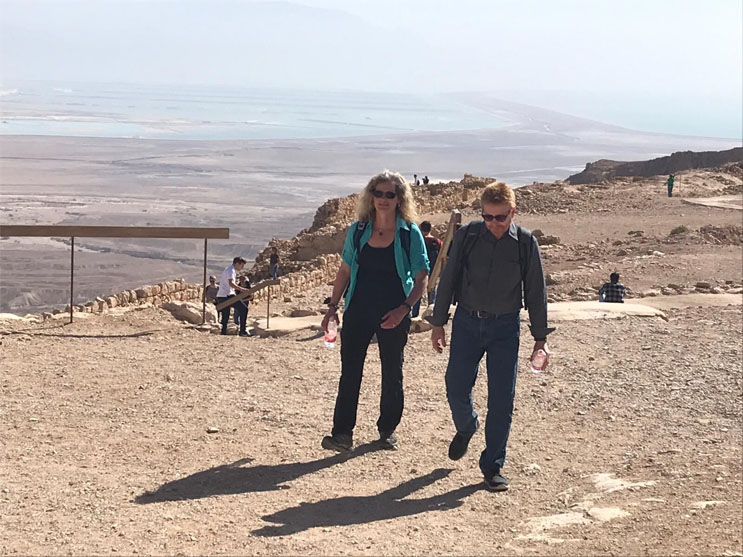 Poncelet-Johnson, whose grandfather and great-grandfather were vegetable farmers in Luxembourg and Montana, was particularly interested in Israel’s agricultural innovations.

“The Mediterranean diet includes a lot of fresh vegetables like tomatoes and cucumbers, and all the food we ate during the trip was produced in the country using reclaimed and recycled water. It’s inspiring to see how they have been able to use their limited resources to provide a fresh, healthy diet for their people.”

The Israeli government, its utilities and private industries work together to support innovation.

The partnerships continue to drive innovation.

“Their philosophy truly is: Keep failing and trying until you get it right. It’s the perfect environment for creativity and innovation to really take off,” she said.

With Denver’s arid climate and growing population, Poncelet-Johnson believes there are many technologies used in Israel that would benefit the U.S. water industry.

“Israel has worked to maximize their water resources. They’ve been on the leading edge of innovation for decades. We can certainly learn a lot from them.”